Nearby are the places, archaeological sites and natural beauty of western Sicily: Erice a small medieval village located on top of Monte San Giuliano; Segesta archaeological area with its well-preserved temple and Greek theater, the island of Mozia, the Zingaro nature reserve, the salt pans of Trapani, the Egadi islands a few miles off the western coast of Trapani and the city of Trapani a sickle-shaped peninsula which is also one of the most romantic places in the Mediterranean.

Distance from the town center: 4 Km.

Some beauties in the surroundings

The town is situated in the west of Sicily on a strip of land jutting out into the sea. It is characterised by long stretches of coast and coastal plains, monuments and palaces, ancient sites, windmills, islands, amazing architecture and quaint provincial towns and countryside. Trapani is a peninsula bordered on both sides by two different seas. It is a compact, modern town that centres around its main street Via GB Fardella from which many of its places of interest are within walking distance. The town also offers some of the most spectacular sunsets in Europe.

Erice is a splendid medieval town located on top of Mount San Giuliano, about 750 metres above sea level, overlooking a superb scenic view. It is clean, quiet and tidy with its lovely courtyards full of flowers. About 15 km away from Trapani, it has fully kept in good condition its medieval town centre through the centuries. There are still remains of ancient Elymian and Phoenician walls and two castles that remain in the city, one of which built on top of the ancient Temple of Venus, where the goddess was worshipped.But Erice isn’t just this. It is also beautiful cobbled streets, stunning landscapes, a unique natural terrace that opens onto the Mediterranean Sea and that is worth visiting for its architecture, landscape and delicious food.A cable car runs from the outskirts of Trapani to the town of Erice.

San Vito lo Capo is an ancient fishermen hamlet placed at the slopes of the Monaco Mount – right in front of a beautiful beach of white sand lapped by crystalline waters – precisely at the north-western tip of Sicily, 30 Km away on the north-eastern side of Trapani. The present seaside village has developed around the ancient Saracen fortress – which has become a sanctuary now – and is characterized by low white houses, built one next to the other, all adorned with luxuriant Mediterranean plants. Pretty characteristic is the sea-front promenade with its small bars, night pubs and typical restaurants where you get the chance to taste gastronomic fish-based specialities and the famous “cous cous” which still in the present days is cooked in the full respect of the traditional Arab recipe.

In the municipality of Calatafimi-Segesta, on Mount Barbaro, sits Segesta. Famous throughout the world for its Doric temple and ancient theatre carved out of rock, Segesta is the perfect place for an instructive visit on its magnificent historical and cultural temple. During summer evenings, the ancient theatre at Segesta becomes a stage for concerts, Greek operas, shows and for the moving poetry reading under the starry sky in an enchanting setting.

The Zingaro nature reserve is a natural paradise extending for seven kilometres along the coast between San Vito lo Capo and Scopello offering nature lovers the chance to admire breathtaking landscapes or to go hiking on the reserve’s numerous nature trails. Scuba divers can enjoy the sea life on the wonderful sea bed. The 1,600 hectares of protected area are all well worth exploring on winding tracks away from the sea or easier footpaths along the coast. The Zingaro reserve is blessed with beautiful scenery as well as with many rare species of plants in their natural habitat. The intense colours and smells of Mediterranean maquis, the coves and grottos with clear waters in varying hues of deep blue, turquoise and green and that sensation of being totally at one with nature make the area an ideal place to visit. 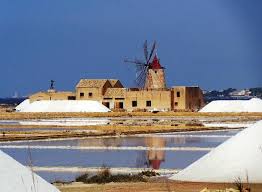 The Regional Reserve of Salt Pans in the Province of Trapani extends from Trapani to Paceco. The salt landscape is evocative thanks to the ancient mills and beams, whose silence is interrupted only by the cries of the seagulls and the sound of the wind. At sunset, the sun reflects off the salt basins, and the white of the salt gives special colours to the sky, to be immortalised in a photo. Recognised as an ecological niche, the salt pans increase their activity only in spring and summer: birds like pink pelicans and herons make your walk delightful, because in this period they find the climate favourable. The Salt Museum, housed in an ancient mill, tells the history of salt mining and the history of those who handled the harvest and salt working: the salt miner.

The Egadi Islands. The archipelago is composed of the three islands of Favignana, Levanzo and Marettimo, as well as the islets of Faraglione, Formica and Maraone. The islands are just off the coast of Trapani, very close at hand and are easily seen from the mainland. With their transparent waters, caves and small bays, these islands amaze in their natural simplicity. The three bigger islands also exhibit very interesting vegetation with plants which are endemic to the Egadi, fauna and landscape features.